Layered with delicious eggplant, packed with a homemade tofu mince filling, then covered in a deliciously creamy but dairy-free bechamel sauce, we‘ve fallen fast for this vegan moussaka recipe!

Yes, it’s a little complicated to prepare and a little tricky to assemble, but once you’ve popped this beautiful dish into the oven, you’ll be glad you put in the effort; even more so when you sit down and bite into the juicy eggplant and vegan mince filling!

Bring a taste of Greece into your kitchen, but leave the meat and dairy at the store as we show you how to make the best vegan moussaka.

How to make vegan moussaka

Moussaka is a Greek specialty that’s sort of like a lasagna, but with none of the pasta. It’s low carb, and instead of lasagna sheets, a moussaka is prepared using slices of eggplant. Traditionally, though, a vegetarian moussaka (let alone a vegan moussaka!) is a rarity because just like a lasagna, this dish is usually prepared using ground beef or lamb and a very milky bechamel sauce.

In this vegan and vegetarian moussaka recipe, though, we’ve removed all the meat and all of the dairy. It’s vegan friendly, so let’s take a look at the different vegan layers that go into assembling what we think is one of the best vegan moussaka recipes out there.

Traditional moussaka requires either beef or lamb mince mixed into a tomato sauce and heavily seasoned. Instead of meat, vegan and vegetarian moussaka recipes can use tofu.

You’ll need extra firm tofu, and you’ll need to use a tofu press to remove all of that excess water before cooking. We then mix the tofu with walnuts, lentils, onions, mushrooms, celery, red bell peppers, and a lot of seasoning!

Bechamel sauce is the topping for all of the best moussaka recipes, but luckily, it’s simple to prepare a vegan version of this classic white sauce.

Instead of using dairy milk, our vegan recipe uses soy milk instead. But, of course, you can also opt for any other plant-based milk, such as oat milk or almond milk.

And finally, you can’t have the best moussaka recipe without the eggplant! This is an integral ingredient because, as we said earlier, the eggplant acts like the pasta sheets you would have in an Italian lasagna.

You’ll need at least two large eggplants, and they need to be sliced into thin strips that can form a layer both above and below the vegan mince. The eggplant needs to be baked on its own, first, before the moussaka is assembled.

What’s the difference between lasagna and moussaka?

Moussaka and lasagna are very similar in concept, but there are some big differences. Lasagna is an Italian dish that layers a tomato-based filling of vegetables and mince between sheets of lasagna pasta and a creamy, cheesy white sauce.

Greek moussaka swaps the pasta for eggplant (moussaka calories are much lower than lasagna!), drops the cheese, but keeps the bechamel sauce and the mince filling.

Can I prepare vegan moussaka in advance?

Vegan moussaka does take a long time to prepare and assemble; there’s no way around that. Luckily, though, this is a great dish to prepare ahead of time.

It’s possible to assemble the moussaka, but leave it unbaked in the refrigerator for up to 24 hours. It’s also possible to place moussaka in the freezer for several months.

Vegan moussaka isn’t just a meat-free, dairy-free alternative to traditional moussaka; it’s also fantastically healthy - which is yet another reason to give this excellent (although admittedly not easy) moussaka recipe a go!

Packed with a protein-filled tofu mince filling, layered with eggplant, then finished off with a vegan bechamel sauce, it’s hard to beat this excellent Greek-inspired dish. If you’re looking for new recipes to try, then why not bookmark our vegan moussaka recipe and give it a go over the weekend? 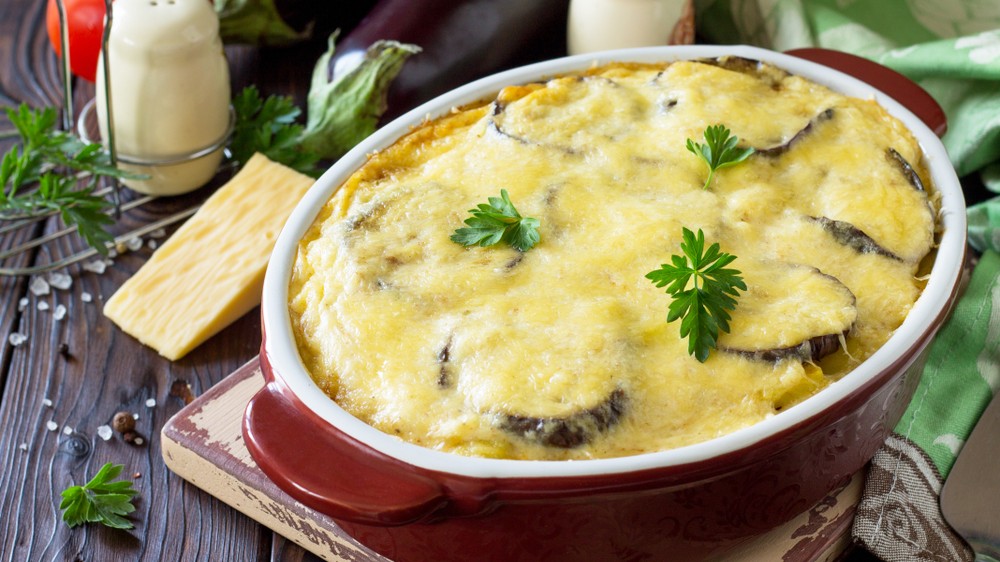 Ingredients for the vegan bechamel sauce

Directions for the bechamel sauce

Directions for assembling the moussaka

Move over veggie burgers; smoked tofu is our new vegan BBQ favorite! If you haven’t yet tried smoking tofu at home, this recipe is for you.