These fish-free vegan crab cakes are prepared using a delightful mix of chickpeas, hearts of palm, and artichoke hearts for a delectable, crispy treat that’s packed with flavor but devoid of seafood!

There’s no crab whatsoever in these vegan crab cakes, but you’ll still taste the sea through the fantastic combination of sauces and spices that go into this wonderful vegan recipe. First, prepare the fish-free vegan crab cakes, then mix up our bonus vegan tartar sauce (with plenty of added dill for taste) to garnish.

How to make vegan crab cakes

Okay, so you might be asking: how can crab cakes be vegan? Or how can you have crab cakes if there’s no crab in sight?

Valid questions. And we’ll be honest; these aren’t really ‘crab cakes’ because there’s no crab in the recipe. What they are, though, is a mock version of traditional crab cakes. So, yes, there’s no crab (because crab isn’t vegan), but through a combination of chickpeas, hearts of palm, artichoke hearts, and a large number of spices and sauces, we can imitate the look, texture, and taste of a crab cake, while keeping it totally vegan.

Mock meats and fake seafood vegan recipes are all the rage these days, and these hearts of palm crab cakes are right up there with the best. Let’s look at the primary ingredients that go into this recipe in a little more detail.

There’s no crab or fish anywhere near this recipe (our seafood stays in the sea!), so you’ll be wondering what’s used in substitution. We’re blending three primary vegan ingredients to give us a mock crab meat filling that’s not only delicious but has a surprisingly similar texture.

Our mock crab meat recipe calls for the following:

All three of these ingredients can be found canned in your local store. They are versatile ingredients, and combined, you have a crunchy yet smooth mixture that forms the basis for our vegan crab cakes hearts of palm patties.

We should note that you can also experiment with other ingredients when preparing mock crab meat. A good alternative is extra firm tofu, which can also be seasoned with ‘fishy’ ingredients such as seaweed and soy sauce (don’t forget to use a Tofu press when preparing tofu!). Another great option is banana blossom (otherwise known as banana hearts), which has become a popular seafood substitute.

Quite a few spices and seasonings go into this recipe, as we’re trying to replicate that seafood taste, as well as that crab-meat texture. There’s a more detailed list of the spices you need in the recipe below, but let’s take a look at the most important additions. These are:

Old Bay Seasoning is the most important addition. This mixture of celery salt, pepper, paprika, and chili (amongst other spices!) is a popular seafood seasoning. While there’s no distinctly fishy taste to Old Bay Seasoning, it’s such a common addition to seafood dishes that you’re likely to associate it with crab cakes already.

Dill has the same effect. Dill is often used to season either seafood or the seafood sauces we use for garnish. Breadcrumbs are an integral component of any crab cake recipe, and so they, of course, make the cut!

In addition to these three main ingredients, we’ll be using garlic, onions, lemon juice, mustard, and more to give your vegan crab cakes a complex taste that reminds us of traditional crab cake recipes.

And how can we forget the tartar sauce? No crab cakes are ever complete with a large dollop of tartar sauce to top the dish!

Traditional tartar sauce is prepared using mayonnaise, which isn’t vegan (mayonnaise is primarily made with eggs). However, these days it’s super easy to pick up a jar of vegan (egg-free!) mayonnaise at the store, and this will form the base of our homemade tartar sauce.

It’s important to note that vegans should prepare their mock crab meat from scratch. You’ll commonly find imitation crab meat in the store; however, this isn’t vegan. Imitation crab meat is prepared using different types of seafood to replicate the taste of crab.

Imitation crab meat is often prepared using processed seafood (such as whitefish, for example) mixed with eggs, salt, sugar, and all sorts of other ingredients. It’s not a vegan substitute, but rather a cheaper version of crab meat (and it’s definitely not healthy!).

What are the best vegan sauces for vegan crab cakes?

Vegan tartar sauce is our favorite sauce for vegan crab cakes, but several other options are available.

These include the following:

This wonderful recipe offers complex layers of flavors and ingredients that aim to recreate the taste of the sea, and we think it does a great job.

If you’re looking to cut down your seafood intake, why not give our vegan crab cakes a try? 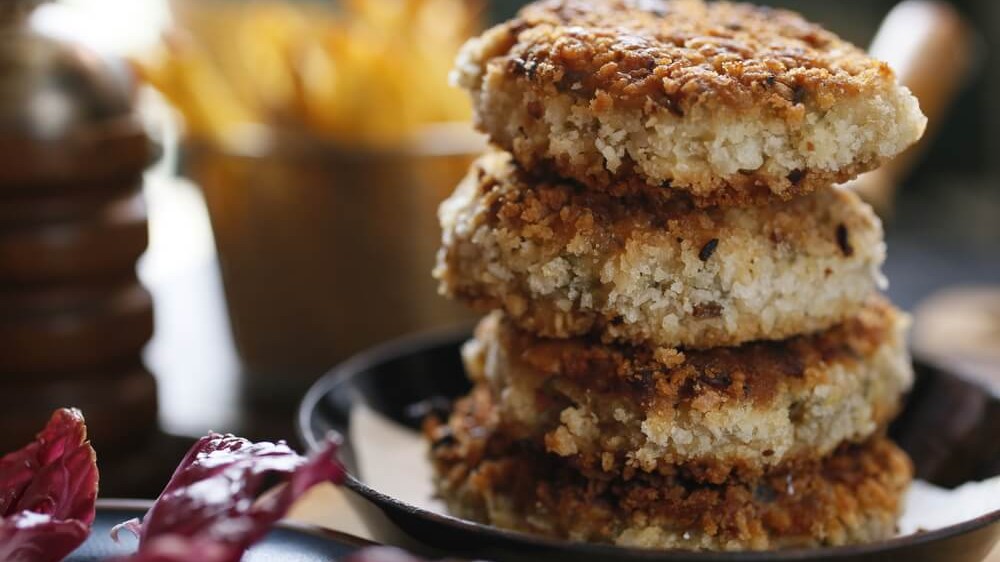 Vegans can enjoy sushi too, with this easy recipe for plant-based sushi made with crispy tofu, spicy vegan mayo, and quick pickled onions.
Read more

Crispy Tofu and Avocado Salad with a Miso-Tahini Dressing

This crispy tofu and avocado salad can be tossed together in under 20 minutes and served with grapefruit and a rich miso vinaigrette. The ultimate weekday lunch!
Read more

We have the perfect recipe for your next plant-based pizza party - a smoky BBQ pizza with vegan mozzarella, crispy tofu, and a golden crust.